A27 ROUTE: WE SUPPORT THE MAGENTA OPTION 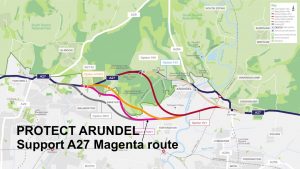 Following detailed examination of all the information currently available on the options put forward by Highways England, Arundel town councillors have voted by a large majority (11-1) to support and campaign for the Magenta option. This route is a genuine bypass and has only very limited impact on the South Downs National Park and ancient woodland. Councillors believe that this route will safeguard the unique quality of our heritage town, which would be seriously damaged by the Beige and Cyan route options.

In the Highways England questionnaire, there is a question, B2, which asks:

Councillors are unanimous that the answer to this question should be “do nothing” because whilst the Cyan and Beige routes are the lowest cost options they are not bypasses and do not meet any of our town’s requirements. They would leave Arundel divided by an even busier, noisier road, they would adversely affect a large number of Arundel properties, including houses in the conservation area and they would have a significant impact on woodland and the South Downs National Park. All these detrimental effects are clearly shown on pages 16-17 of the Highways England brochure.

It is important that every resident of Arundel makes their views known during this consultation because Highways England’s decision will be strongly influenced by the number of respondents expressing support for each option-which includes residents of other local communities who will have their own local interests to defend.

There is a real risk that the Beige or Cyan routes could be chosen if Arundel does not rally behind its preferred option and the towns votes are diluted across the different by-pass routes.

Therefore we advise Arundel residents to support the Magenta route.

Have your say online at: – A27 Consultation Response Form